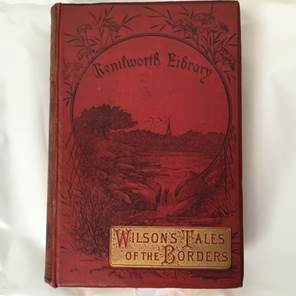 We also continue to discover further editions of the tales. The photograph is of a reprint in 1887 as part of the “Kenilworth library” series. A selection of what were considered to be literary classics from the back catalogue of the time.

Our March “revival” life event was a success and again attracted an audience of around 60.

We have been awarded some funding from the ‘Pen and Palette’ fund and the ‘AONB’ programme to let us make a start on producing some more professional display material for the project and make a start recording some of the retelling of the tales for future repeat use. More on all this latter. We still await a further funding decision on this.

The first of our revival editions of The Tales is close to selling out with only limited copies now available.

Exciting research from one of our readers has recently suggested that Wilson’s tales may have actually contained the first ‘who dun it’. This has traditionally been attributed to Allan Edgar Poe in literary circles for his short story ‘The Murders in the Rue Morgue’, first published in 1846. A tale which one suspects Conan Doyle largely lifted his ‘Sherlock and Watson’ characters from and it the unexpected twist in the tale was that it was an Ourang-Outang that did it!

However the tale of ‘The Forger’, written by Alexander Campbell and published in 1835 as part of The Tales, predates this and contains all the aspects we would recognise as a ‘who dun it’ or ‘detective story’.

Finally a date for the Diary. Northumberland Theatre Company are bringing their stage version of ‘Lancelot Errington: A Tale of Lindisfarne’ to the Berwick area in October. It will be told in the Town Hall on the 10th October with a background talk on the event it depicts, the Jacobite 1715 uprising.

It will also be presented as part of a suite of 6 tales as part of ‘A Wife of the Gallows & Other Tales’ at Paxton House on the 11th October and then tour to other venues.

Our profile continues to rise. Our revival edition was reviewed in ‘Scottish Field’ and we were recently invited to and attended the Wigton Spring Book festival.