The Wilson’s Tales Project have secured an important piece of Wilson memorabilia. A three foot Brass Memorial Plaque has come to light and been purchased by the Project. 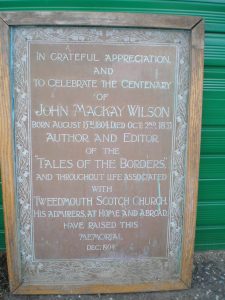 A local man came forward at the Bygone Borderlands event to say that he knew of the whereabouts of a plaque which had been made IN 1904 to mark Wilson’s centenary. The Wilson’s Tales Project has since been able to negotiate the purchase of it.

Andrew Ayre, project director, said of the plaque “This is really quite an exciting find for the Project, and it shows that there was still considerate interest and recognition of Wilson and his project at the time.”

The Plaque used to be at the old Scotch Church in Tweedmouth, which was in the west end, round the corner from our partners at Berwick Watchtower gallery (See it on this map, marked as Presbyterian Church).”

We think the Church was knocked down in the 1970s, but if anyone has any information regarding Tweedmouth Scotch Church we would be interested to know. You can contact us on aa@www.wilsonstales.co.uk, leave a comment at the bottom of the page, message us on Facebook or tweet us @WilsonsTales

IN GRATEFUL APPRECIATION,
AND
TO CELEBRATE THE CENTENARY
OF
JOHN MACKAY WILSON
BORN AUGUST 18TH 1804. DIED OCT: 2ND 1835
AUTHOR AND EDITOR
OF THE
“TALES OF THE BORDERS”
AND THROUGHOUT LIFE ASSOCIATED
WITH
TWEEDMOUTH SCOTCH CHURCH.
HIS ADMIRERS, AT HOME AND ABROAD,
HAVE RAISED THIS
MEMORIAL
DEC: 1904

That he had admirers “at home and abroad” willing to raise a memorial 69 years after his death shows that Wilson’s Tales really did have a worldwide following, hence The Wilson’s Tales Project has potential to bring in tourism to the Borders from outside of the areas covered in the Tales.

The Wilson’s Tales Project hopes to put the plaque on display at Berwick Library for Heritage Open Days between the 12th and the 15th of September. 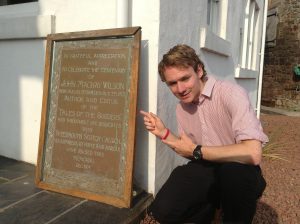