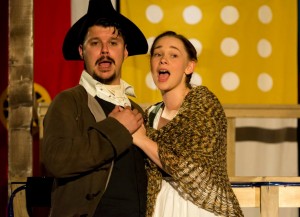 Our fifth live event, “The Adventures of Lancelot Errington and his Nephew Mark: A Tale of Lindisferne.“, presented with Berwick 900 by Northumberland Theatre Company with support from John Nicholls from the Northumbrian 15 Jacobite society was well received and attracted our largest audience yet of over 70.

The event features an introduction to Wilson’s Tales and the Wilson’s Tales Project by Andrew Ayre, Project Director, “The historic context of the rising and the tale” by John Nicholls MBE, Chairman, The Fifteen (The Northumbrian Jacobite Society) and the Northumberland Theatre Company’s performance of “Launcelot Errington and his Nephew Mark: A Tale of Lindisferne.”

The Northumberland Theatre company are already receiving rave reviews for their latest production, “A Wife or the Gallows” from which from which “Launcelot Errington and his Nephew Mark: A Tale of Lindisferne.” is extracted.

“Six amazing actors – seven if you include the stage manager – and one brilliant show. This must mean the Northumberland Theatre Company’s latest production is under way … My favourite story was the Northumbrian tale of Launcelot Errington and his Nephew Mark … ” – Michael Pearson, Northumberland Gazette.